GAINESVILLE, FL: After nearly two years of planning and development, the Young Alumni Advisory Board was initiated on Friday, October 5.  Lead by Kathryn Blackwell (BS ISE 2009), Jessica Hinkle (BS ISE 2009), Natalie Keller (BS ISE 2010) and Guillermo Moratorio (BS ISE 2008), the board was formed in order to foster interaction between young Industrial and Systems Engineering alumni and the Department. 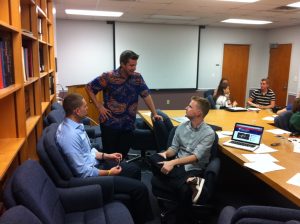 Specifically, the board has four committees with the following functions:

Engagement: Enlist the time and knowledge of our young alumni to connect ISE students with industry.

Feedback: Provide insightful feedback to the department regarding the professional preparation of students.

If you are interested in the getting involved with the group, send an email to YAABGator@gmail.com.